Algorithms and journalism: The journalism industry is declining and algorithms may be the solution to helping local areas get the news they deserve.

How often do you read the news? If the answer is not often, you are not alone. In the U.K., the journalism industry has been in decline due to a fall in readership, closure of newspapers and loss of journalists. Print journalism has plummeted by over 25% – from around 23,000 in 2007 to 17,000 in 2017, according to an independent review by the U.K. government. Even though there are digital alternatives, the local areas are still the most affected by this. There is a lack of coverage and journalists in pockets across the U.K. This decline pushes the industry to find alternative methods to produce content for readers in these areas.  The question is, can algorithms save journalism?

Why is journalism in decline?

The fall in the journalism industry can be highly attributed to the dip in print readership. The number of print newspapers distributed every year has been in steady decline. The circulation of The Times fell from 508,250 in 2010 to 417,298 in 2019, according to the Audit Bureau of Circulation. And this is only one example. The same dataset showed that the top 15 newspapers in the U.K. have all experienced a downturn in the readership of their print newspaper since 2010.

One of the main issues is that print newspapers rely heavily on classified advertisement. The rise of the internet has led to a shift to online advertising. This results in a loss of investment and job cuts, according to a Cairncross review. With fewer journalist, the coverage of local news is falling as these are the areas that cannot afford to keep the industry afloat.

While print readership is declining, digital publishing is filling this gap. In the U.K., reading or downloading digital news has risen from 20% in 2007 to 69% in 2019, according to the Office for National Statistics. This shift within the way readers are consuming the news indicates a need for change. This is where algorithms come in. The Times, The BBC and The Sunday Times all use computer generated content. Leading newspapers are incorporating new methods to shift their business into this technologically driven world. 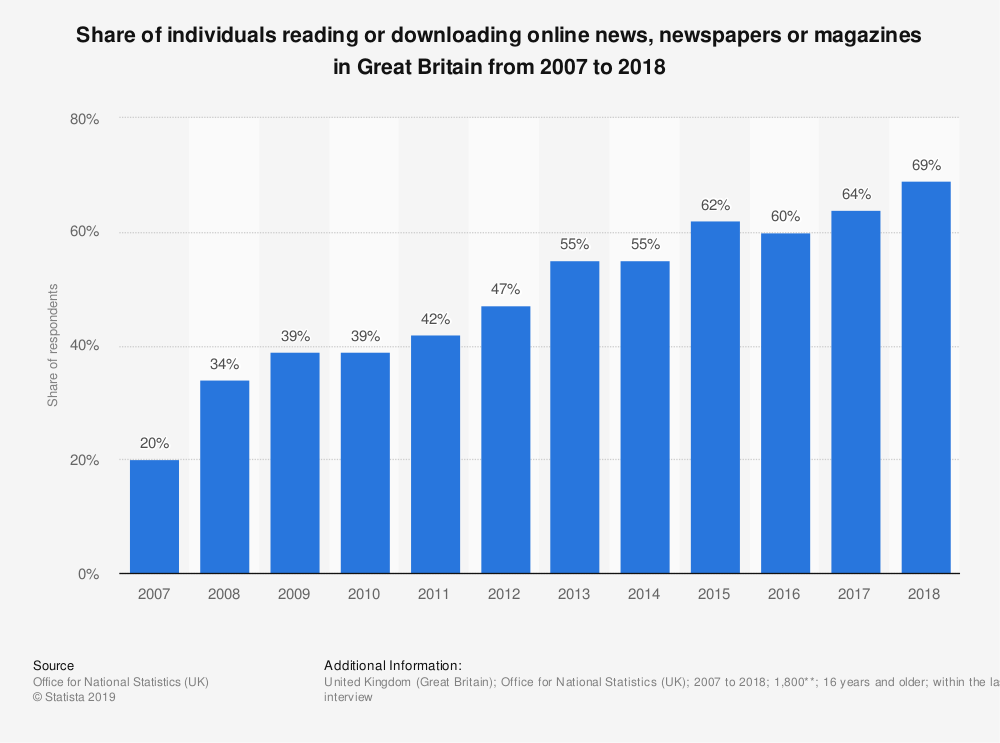 Graph that shows individuals who read or download the news (2007-2018) – Photo by: Office for National Statistics (UK)

Gap in coverage in local areas

The impact of this decline can be seen the most in the local areas of the U.K., where the population is being starved for news. Since 2007, the number of full-time journalists has fallen by over 25%, according to the Secretary of State Matt Hancock. The borough of Walsall is only one example of a local area that is not receiving the coverage their citizens deserve. This borough is the home to nearly 300,000 people and is located in the West Midlands. There is a feeling of lack of coverage, especially when it comes to local politics.

The alternative news sources for this borough is the Express & Star, based in Wolverhampton. There is no longer a local newspaper, and this leaves citizens with a limited coverage of their area. Edie Hughes, a Conservative MP who grew up in Walsall, remembers a time when ‘There was a shared sense of people seeing the same thing in the newspaper, [it] gave lots of people good information on things that had happened locally. And now that’s gone,’. This is having a huge impact on these areas where the sense of community is forefront in their lives.

Algorithms as a solution

The fall in journalism may not mean the end of the industry as we know it. The BBC has a solution to the lack of coverage in local areas. This is an algorithm called Salco. The technology sources data and inputs it into a template created by journalist. Before publication, it is reviewed by an editor. An example of its recent use is with local election coverage. With 248 councils in England up for election, it has become clear that the lack of journalists means that it cannot all be covered. The use of automation allowed the BBC to reach local pockets that were lacking coverage, such as Walsall. This could be the solution for boroughs that no longer have journalist. There is a gap that needs to be filled, and algorithms may be the solution.

Algorithms are a solution for data driven and factual articles. In an interview conducted with Juliette Garside, Investigative Journalist at The Guardian, she highlighted that ‘it’s important to separate researching from writing’. She then goes on to expand on this point by stating that some ‘kinds of research can be aided by robots’ using the examples of data sets, speed of organising information, and creating visualisations of the data. The difference between the two is key when looking at algorithms as a solution to the decline of the journalism industry. Salco demonstrates that algorithms can be valuable to fill the fall in journalist in local areas. But, in the case of articles that are written by human journalist, there is still no solution available.

Woman reading the news on laptop- Photo by: Author

Have we cracked the code?

It is important to highlight that these algorithms are still in development and research stages – Salco is only in its second phase. Technology as we know it, is not fully capable of saving the entire journalism industry. The decline in print journalism is demonstrating a shift to the digital. More readers are accessing their news online and this calls for a solution. While looking at the loss of journalist and coverage in local areas – there is no solution at present. Algorithms can be the answer to publishing factual and data-driven articles. But, they do not have the capacity to cover human-interest pieces. This will leave a gap in an area of journalism because of the overall decline in the industry. The local areas deserve more and we must continue searching for a solution.